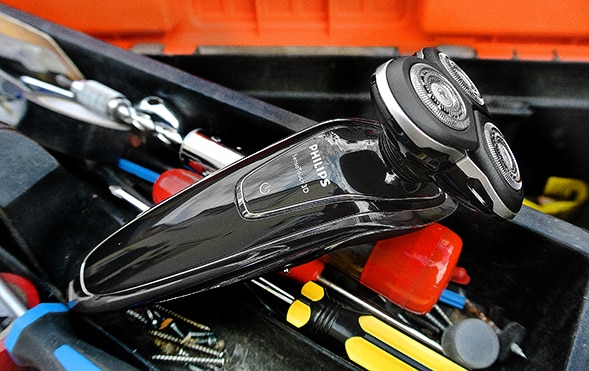 I was lucky enough to be sent the Philips SensoTouch 3D RQ1280/22 Razor by the Philips Outreach Team who rightly thought that I’d love to try out and review their flagship device. Because I have rather feeble facial hair, this device has been tried and tested by both myself and my step-father who has very fast growing and strong facial hair and likes to keep a constant clean shave.

The razor comes in a great big box, very exciting, including a whole armory of docks and accessories to go with the device. There’s the razor itself, a lightweight dock, the jet clean system with a bottle of fluid, a pretty cool bag and then your blade guard and the plug. 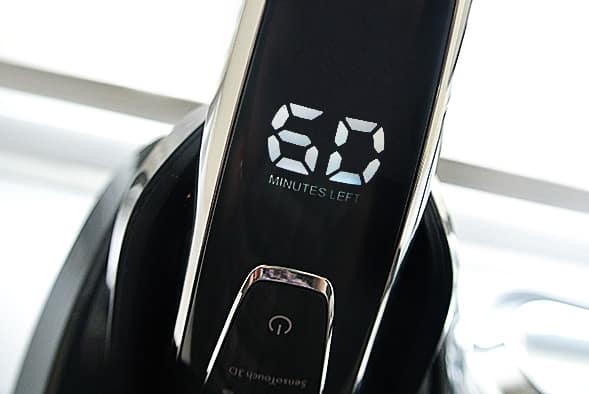 The razor has a full LED display that as well as giving alerts through a series of beeps and symbols, pointing you to charge it or clean it. The largest part of the display is devoted to a numbered countdown of the battery time remaining and after a full charge gives you 60 minutes.

This gives an incredibly close shave, I’d say better than my wet shave razor and obviously as it’s electric, so much more convenient. One of the best points about this is how it can adapt to your preference of shave; if you like using gels and foams, then go for it, it has been designed for both wet and dry application. There’s also a small pop out trimmer on the reverse that pops out just behind the heads on the main body for sideburns and other areas. 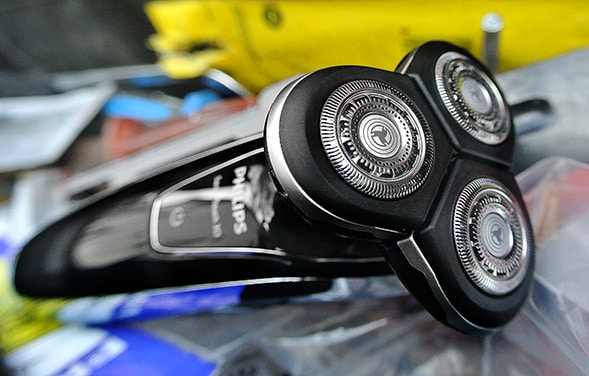 The device has 3 heads that are on pivoted plates and curve to the shape of your face as you move the device along the skin, it’s called GyroFlex 3D. Now this isn’t something massively new, especially in relation to Philips razors, but the special thing with this is that the whole head also moves and curves, giving a truly 3D shave, hence the name. The way the metal heads are shaped mean that even with a dry shave; there is absolutely no drag whatsoever.

The jet clean system is cool. I mean really cool. As you see in the picture it’s a sort of pod. There’s a tray underneath that pops out for you to fill with Jet Clean solution. A bottle of Jet Clean is designed to last you about a month according to the bottle, but I’ll be honest, I’ve got well on my way to 2 months out of it. 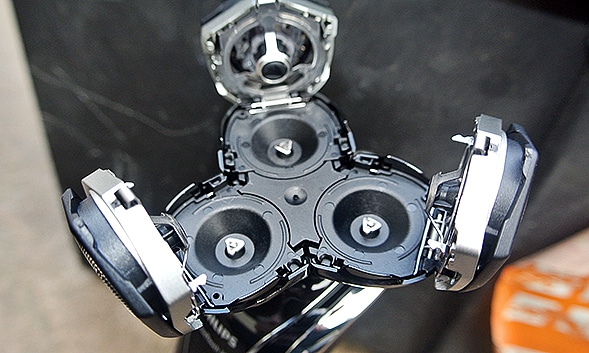 Empty all the hair out the razor first. The heads flick up with one flick and then just tap to get the majority or the fluff out. Place the razor upside down into the pod and then select an option from the concealed LCD that lights up when activated. There’s AUTO, ECO and INTENSE. To be honest, I’ve just been using it on Auto, I’m not so sure between the differences of AUTO and ECO and I wash the razor regularly enough not to need to use the INTENSE option yet.

After you set your option, the device descends on arms into the fluid with an eery robotic motion and sound. Everything goes quiet. Then the heads of the razor start up and get working in the fluid and this lasts for a few seconds and seems to start and stop. The jet clean pod then lifts the razor out and a flashing sun on the front indicates the device is drying.

When you don’t want to use the pod, using the lightweight cradle is a much better option. The cradle has 3 sucker feet that keep it secured to glass or tiles and are pretty darn sturdy. The 2-pronged adaptor that you use with the jet system is the same as you use for the cradle. As you don’t need to use the jet clean system that often, it’s not really a problem swapping the leads over.

This is a serious bit of kit and priced at an RRP of £300. I wouldn’t say this is ideal for a first attempt into the world of electric razors based really on the price, I think this is for someone who’s a little older and has been fighting with rapid facial hair growth for many years, however, I would definitely recommend Philips razors for anyone wanting to start, just maybe not this one right away, get used to it first. I’ve actually given this to my step dad who is definitely getting more out of it than me and is absolutely in love with it, ranting and raving over it at any given opportunity.