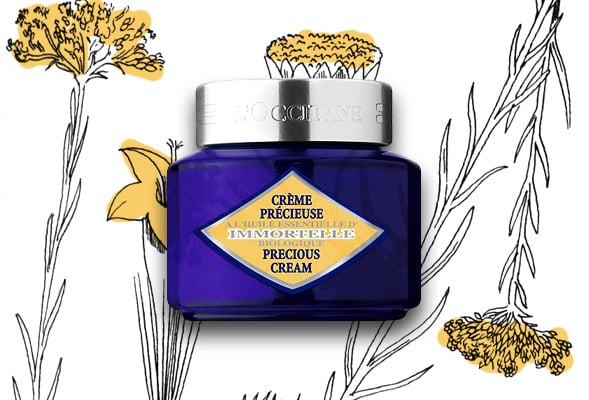 This post has been quite a while in the making as I wanted to get it tested properly. The Immortelle range has been designed to increase collagen as well as firm and brighten the skin, and such results can’t be achieved within a weeks use, you need to go the full hog. It was my mum that tested this, and yes I know, ‘Man’face, but it’s still kind me writing this.

The cream has an interesting fragrance, very plant-like and quite potent, a mixture of fresh cut stems and well, Imortelle flower I imagine. It’s quite a thick whipped cream and applies into the skin with an almost balm like constancy that sinks in quickly and leaving no sticky trace.

Actually… I tell you what, I’ll let the tester explain it herself to give a better insight:

“I used precious cream twice a day for four weeks. At first I was disappointed with the smell, but after a while it becomes strangely likeable.

It does smell just like the flowers and I know this because we were surrounded by them! The weather was very hot but the cream held its own. At first I didn’t think that it was being effective as it stayed on the surface of the skin. My skin was not dehydrated as I keep it well moisturised. After about ten days I felt it begin to go deeper and left me with very soft and more plumptuous skin.

After four weeks I think I can say that my skin was brighter and that finer lines were less noticeable. It didn’t really have the same effect around my mouth. It’s a quirky kind of product in fabulous packaging. I don’t think that staff in the shops I have been in know enough about the product to promote it as well as they could. It is a boutique range and could be attractive to those of us who are a bit fed up of the sameness of the *a certain brand that shall remain nameless*’s Companies. It’s also good that they are now supporting farmers. Whoops the oven timer has gone off!!…”

I can’t really say much more than that as far as testing it goes, but I can comment a little more on the ingredients. To start with there are natural extracts such as grape, sunflower, rosemary, evening primrose and soya bean, but I want to look at the ingredients that really give the product it’s age-defying properties. The Imortelle (Helichrysum Italicum) Extract featuers fairly far down the list of ingredients, so not the highest ration in there but I am lead to believe that it’s a very concentrated and potent extract so you really wouldn’t need that much.

I’ve actually briefly read through a paper from the  Journal of Pharmacy and Pharmacology from The Royal Pharmaceutical Society on Anti-inflammatory and antioxidant properties of Helichrysum italicum. It concludes that Imortelle extract induced a corticoid-like mechanism, acting as an anti-inflamatory as well as being a free-radical scavenger. Basically, skin is kept calmed and free-radicals within the skin are encased, preventing them from causing cellular damage on both a surface and sebaceous level. This stuff really works.

The testing and evidence both back this product up highly and there are other products in this range to support its effects. Definitely worth giving them a try.