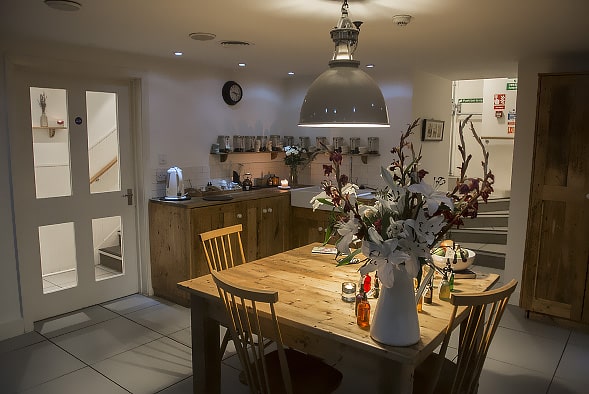 I have been a lover of Lush from a very young age. I honestly believe that no-one does bath and body quite like they do – innovative, fun, creative and beautifully thought out. We’ve seen the company develop and grow over the last 5 years, becoming a real force to be reckoned with in all areas of cosmetics. They’re also enjoying enormous, cult success of their Spas, which after receiving a wonderful invite to try one of their treatments, is the topic of this article. 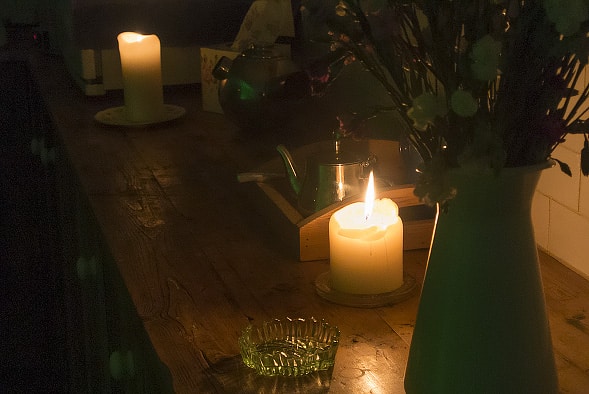 There are now LUSH Spas in Leeds, Poole, Kingston-Upon-Thames and Kings Road London, but there are plans to open new locations in both Edinburgh and Liverpool. Being more local, I went along to the Leeds Spa. Other than having the word SPA written on the sign outside, you don’t notice anything different about the store so I was intrigued as to where the Spa was. 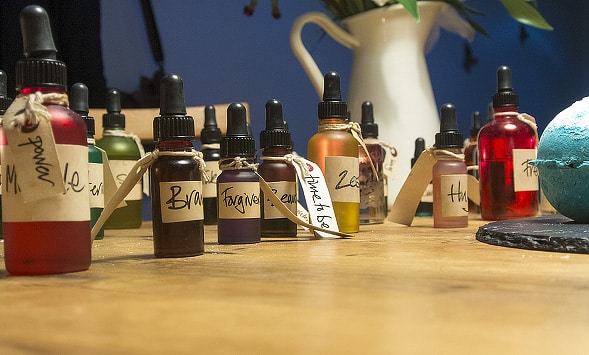 On my arrival I spoke to the most amazing consultant who knew her products inside and out. I have to say however, this is not uncommon throughout Lush, I have never known a breed of consultants be so enthusiastic about the brand, products and work they do and the Leeds team are certainly one of the best. In fact what the hell, as I know they’ll be reading this, they are the best! 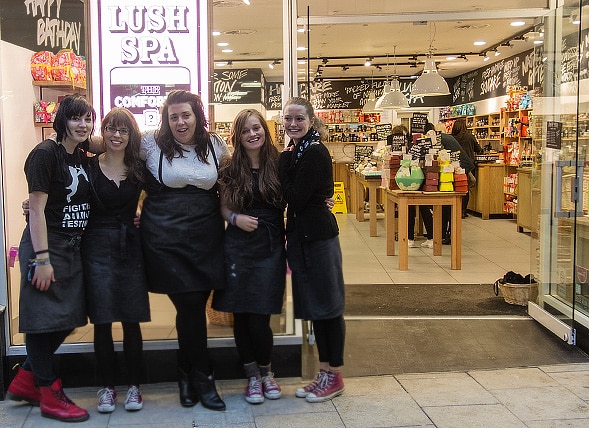 They should be so proud of the fabulous environment they’ve created and despite arriving all busy-busy and stressed, I was immediately relaxed and calmed. I entered the store, walking past someone blowing gorgeous, scented bubbles into the street, and glancing around the shop, saw customers and consultants engaged in really connected service with plenty demonstrations and two-way chat. 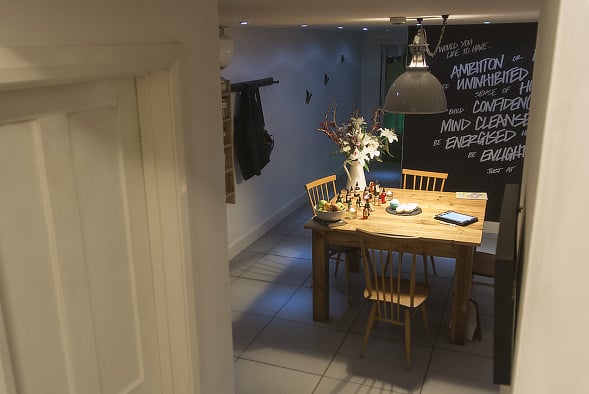 After a guided tour of the fab new products, Charlotte, my therapist, came up to great me and lead me to the Spa. Now, you’re taken through the staff shop floor entrance which immediately makes you feel like you’re part of some special secret which really connects you with the store. 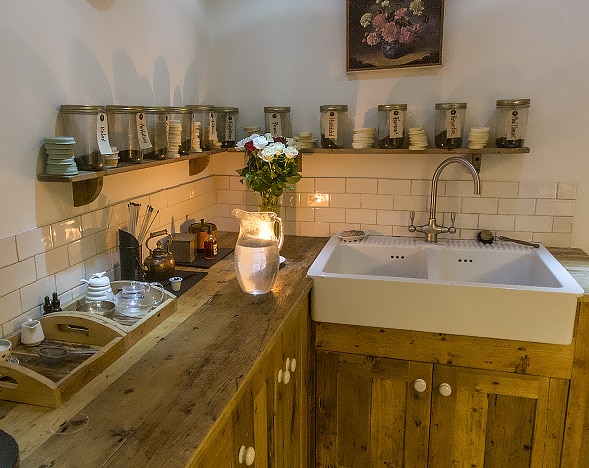 You’re taken into the underbelly of the shop into what can only be described as a country kitchen, with gorgeous reclaimed–wood units, and a large kitchen table with chairs, all beautifully lit. You feel as if you’ve been invited to someone’s home. 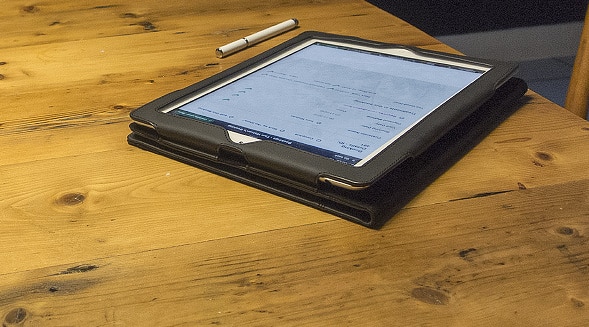 I sat with Charlotte and after filling my details in on their new iPad system (it was their first day of using it), I was told all about the treatment I was about to have and I was able to ask a lot more about the Spa. The treatment was in fact the ‘Good Hour’ – “…an intensive massage set against ‘heave-ho, me hearties’ sea shanties that rigorously rid your body of muscle tensions”. It was inspired by the pulling of ropes, which is pretty darn accurate when working on my back! 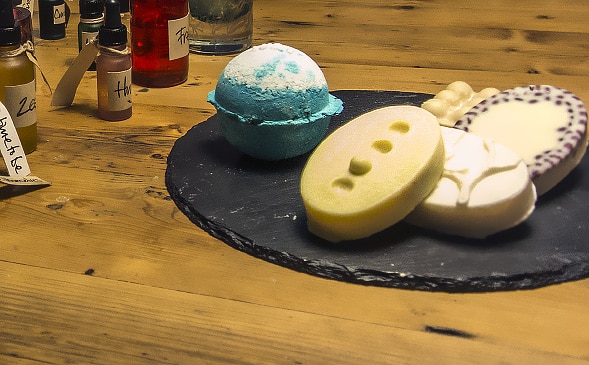 I was given a glass of cool, lemon infused water to prepare me for my treatment and then asked to choose which of a selection of four massage bars I’d like. I chose ‘Therapy’, with a chocolate-y rich blend of Cocoa and Shea butters as well as Sweet Orange, Lavender and Neroli oils. 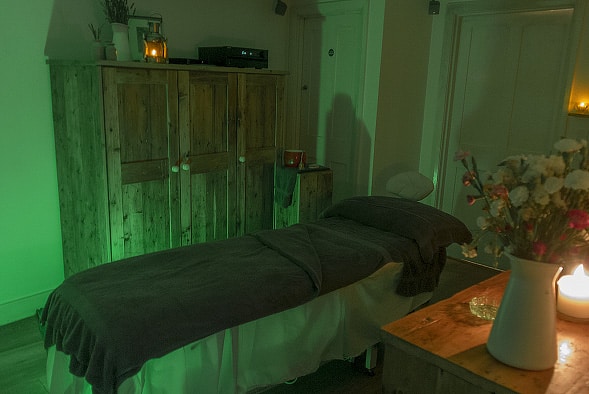 Once I’d been lead into the treatment room, I was told to take my time in getting ready and if I wished to, I could take a shower in a beautiful wet room filled with Lush products, how could anyone resist? 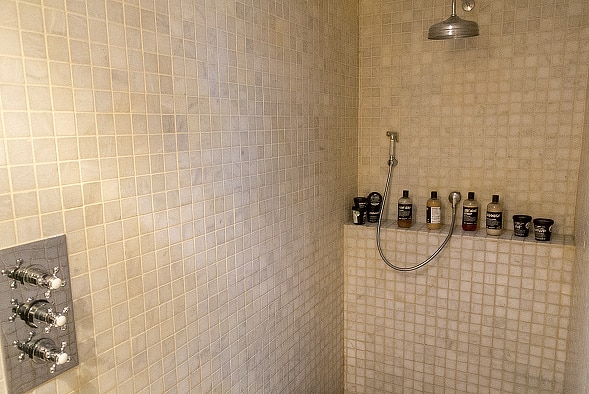 Just before she left the room, the told me to ring the bell to let her know I’m ready, but also poured a jug of water, of which into she’d just dropped a Big Blue Bath Bomb, over a concealed bowl hidden under the bed. When the warm, bubbly water hit the bowl, which I’m guessing is possibly filled with dry ice, the floor filled with a sweetly fragranced smokey mist – ‘sea-mist’.

All settled on the table, Charlotte re-entered the room and both the music and treatment began. The music is bizarre and incredibly different to what you’re used to from a spa but really works; it’s by one of Mark Constentine’s favourite folk groups – ‘Imagine Villiage’, and has a really eclectic mix of sounds, culminating with a fabulous remixed sea-shanty coupled with Captain Pugwash, all composed by Simon Emmerson. Oh and yes, I did say Captain Pugwash. 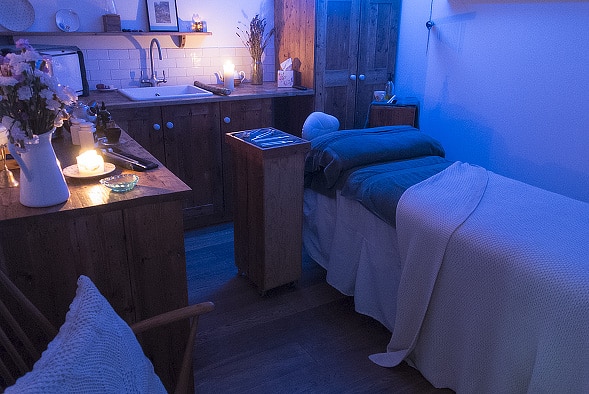 The treatment starts on neck, then to the chest, down the arms, shoulders and hands. Then continuing in the same firm and deep pressure, it’s the legs, heels and feet after which you’ll be asked to turn and then the treatment continues on the back of the legs and then over the back. Trigger point massage, a form of pressure point therapy, introduced to LUSH by Gavin Morley, is used throughout the treatment. Trigger point massage is whereby pressure is applied to the knot and then when released, blood flows to the muscle and helps to breaks the knot down.

As well as the massage bar, there’s also the use of custom–made, massage jellies that are kept on ice and are applied on areas that are particularly tight or tender, but in a way that doesn’t make you jump off the bed. They immediately sooth and relieve any discomfort – amazing! 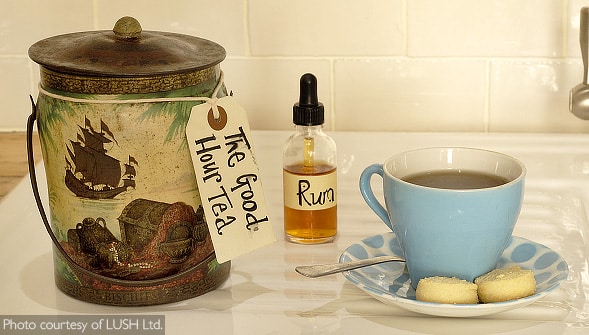 After the treatment was finished, I took an incredibly relaxing shower to rinse off, got changed leisurely and returned to the kitchen table, where I was to be greeted by a cup of delicious black tea, shortbread biscuits and a dropper bottle filled with ‘Ship’s Rum’, which I was told would give gorgeous flavour to my tea. It certainly did.

The only bad element to the experience was that it had to end, and I knew that I must return up the stairs, beyond the shop floor and back into the hustle and bustle of Leeds. This is something I’ll remember for a very long time and if you ever get the opportunity to book in with them, please do. You leave with the rest of the massage bar bagged up for you, feeling like you’re walking on air and definitely convinced you’re a few inches taller as Charlotte promised.

This is a wonderful twist on spa treatments. I mean, sea shanties? LOl! Its different from the usual “tranquilty” cds. Looking at the photos, I wanted to climb right up on that table! Again, I’m reminded its been too long since I was last in a Lush store. I don’t suppose they’ll open one in B’ham any time soon? No? *goes away dejected*

I feel relaxed just by reading and looking at the pictures (the one with blue lightning!!). If only the Lush store in my city had a spa… :)

This sounds fantastic. I’ll admit I’m not that much of a Lush fan myself but this sounds like something I’d like to experience. Almost makes me wish I was working back in Leeds still!

Wow! Sounds and looks amazing, if I’m ever in Leeds I know where to go for some R&R.