Hello and welcome to another Moanface, and boy, this one’s a doozy. Movember, where icky, scrawny, indie guys with sleeve tattoos and ear loop things (I have literally no time for those, I find them utterly exhausting) sport unsightly moustaches twirled with thick wax in ‘support’ of Movember.

Now, Movember’s campaign is all about men being more aware of their bum and balls and the types of life threatening and life changing cancers that can be commonly found there. The main target is prostate cancer, but testicular cancer is still important. Gillette, Penhaligon’s  (those were literally my latest encounters in the 5 minutes before I wrote his article)  and other such companies who will remain named in time I assure you, seem to have missed this message.

If you leave this article with one thing, it’s to go an get yourself a prostate exam booked. Don’t be a puff (I’m allowed to say that) and just get it done, because that few seconds of mild-embarrassment could potentially save you a lifetime of pain and hardship for you and your loved ones. OK!?

So it’s a great cause, no argument, and the money raised goes to other great causes and health initiatives here in the UK and across the globe. That’s not a terrible thing, surely? No, it certainly isn’t, it’s a great thing, but my Moanface is in regards to the evil little buggers out there who see this as another sales exercise/opportunity.

Simply by typing Movember into Google, the first ad at the top of the page was Penhaligon’s. A link to this page selling their £5 moustache wax of which they boast £2 per pot will go to the Movember campaign. So you’re actually telling me that it costs Penhaligons £3 to make a 7g tin of this!? No, I don’t think so (if it is, I could do it for them in my kitchen for less, get in touch).

Therefore they must surely be making a profit!? This is speculation I must add and I could be wrong, it might genuinely cost £3 per 7 gramme tin but I really don’t think so. Why couldn’t they just donate the costs to the campaign and donate the whole £5? Or maybe even at least £4, but not a measly 40% of the sale price.

No two ways about it, some brands are attempting or at least seeming to be making a profit off cancer, yet again (Pink Ribbon-gate anyone!?). 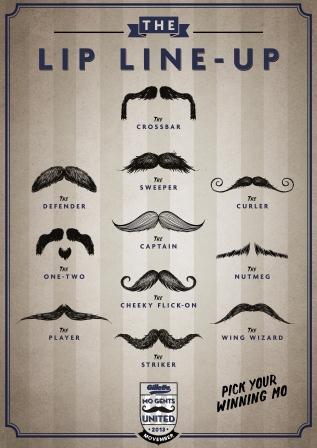 Gillette posted and then later paid to promote a visual about moustaches on Twitter. Not one single mention of prostate cancer, not really spreading a message at all (Movember is written in almost unreadable letters at the foot). No, a visual completely designed to sell their bloody razors. I honestly couldn’t give a flying **** what kind of hideous moustache you wore, as long as you were effectively spreading the word about getting your bum and balls checked. Neatly bringing me to my next point, the trend of the tash.

Moustache rings, moustache jewellery (for women!? eh!?), moustache jumpers, moustache food, moustache cushions, moustache everything. Movember has created the biggest ever boom on the now passé moustache motif. Do you really think the profits of all this pointless paraphernalia are going towards the campaign? Do you really think the mindless army of 12 year-old One Direction/Bleiebear fans know why the image is so important; or if they did, actually give a hoot now or as they grow up? The whole campaign image has been lost in this ridiculous and farcical pseudo-fashionistic mess of crappy commercial bollocks.

If you really want to support Movember, get your prostate/balls checked and donate money direct to Movember; they’re doing awesome work. Don’t throw your cash at pointless products you don’t need, where companies will almost certainly take a profit, but directly, to your friends and loved ones who are growing their goatees and tousling their tashes. If they’re not accepting donations by the way and are doing it just because they think it’s cool or “because everyone else is doing it”, come at them with a razor… but by god, as long as during November it isn’t a Gillette!

So come on, what do you think? Leave your say in the comment section below and just vent.

You are here: Home › MOANFACE › MOANFACE: Have we lost the meaning of Movember?

I also with everything you’ve said and like Sarah above I don’t buy into the the whole pink October thing either. I’d rather my money go directly to a charity itself. Thankfully the male friends of mine who participate in Movember always raise money probably because they work in the charity sector and aren’t doing it to look like a trendy twat!

Thom, as always you don’t hold back. Perhaps the brands you mentioned will read this and mend their ways? I do lots of eye rolling in October when the annual flood of pink merchandise hits the market. As you say, the best bet is to simply donate directly to your favourite cancer charity.

Nail on head here Thom. The message has completely been lost. And don’t even get me started on Gilette…

Absolutely agree with everything you’ve said in the post – but just wanted to pick up on your last paragraph as I have seen this so often and I think it’s appalling. Fair enough, have/grow a Moustache, but don’t go posting pics of your ‘mo’ on Facebook/Twitter claiming it’s in the spirit of Movember if you aren’t also raising money. If that’s the case, you’re not partaking in Movember – you purely have a comedy moustache. Movember isn’t a nationwide gimmick, it’s meant to be a way of getting people involved in raising money for a hugely important cause, and that message has – as you so eloquently explained – been lost beneath a sea of advertising and quite frankly, ignorance. It makes me sad. Great post, though! X

PS – It also makes me stabby that people are doing the same sort of crap with the Poppy Appeal. Because apparently having the classic paper poppy to show your respect isn’t enough, you can now pay £12 (of which about £3 goes to the Poppy Appeal) to get a diamanté-encrusted poppy ring. ARGGH.

Hit the nail on the head with this one Thom. As you know I have strong beliefs about ingredients in products and have always hated Pink Washing in October. Now I feel the same way about Movember. Consumers should just donate to the charity and stop buying all this crap!