Thomas Dunckley, The Candy Perfume Boy – In this comprehensive guide, I’m going to take you through the many styles of masculine fragrance, ranging from the woody to the oriental, and all that’s in between. All you need to bring to the table is an open mind, a willing nose and a sense of adventure.

No fragrance genre is more associated with the domain of man than the fougère. This is the style of fragrance to go for if you consider yourself a refined man or a gent with dandyish afflictions.

(Paul Parquet; 1882), this style of fragrance is all about cleanliness and soapiness created by pairing the sweet herbaceous tones of lavender with the soft, hay-like nature of coumarin (an isolated material found in tonka bean).

The result is a smooth, handsome and barbershop-esque signature that feels both smart and relaxed.

For something a little bit more modern and playful however, one cannot go wrong with Jean Paul Gautlier’s Le Mâle (Francis Kurkdjian; 1995).

Now, I know that you may be thinking that every man in the whole darn world wears this one, and you wouldn’t be wrong.

There’s a reason for Le Mâle’s popularity though, and that reason is the fact that the fragrance is an exceptionally pieced together fougère. Here, the barbershop elements are given an injection of steroids and amped up to an almost caricature level.

It has a huge, great big lavender note, tons of mint and plenty of smooth, creamy vanilla. Le Mâle is all about smooth chests, big muscles and skintight t-shirts, and it’s great.

For a more refined fougère, and one of my all-time favourite masculine fragrances, it is worth seeking out the impeccably tailored Yves Saint Laurent’s Rive Gauche Pour Homme (Jacques Cavallier; 2003).

Created under the artistic direction of Tom Ford (a legend of the menswear world if there ever was one), Rive Gauche PH takes the traditional themes of the fougère and pairs them with a smooth and powdery patchouli note that adds effervescence and lift.

This is a fragrance that feels rugged and sexy but in a calculated way, evoking the idea of perfectly sculpted designer stubble and generally well groomed gents.

Finally, we cannot mention fougères without discussing one of the genre’s more unusual offerings, masculin Pluriel by Maison Francis Kurkdjian (Francis Kurkdjian; 2014) – a fragrance that is very much a modern twist on this classic masculine style.

Kurkdjian was the perfumer behind Le Mâle, but these two fragrances could not be more different. masculin Pluriel pairs the familiar soapiness of a Fougère with a rugged woody-leather accord that feels completely modern.

The result is a sexy masculine fragrance that is most definitely worth seeking out.

Citrus notes are some of the most pleasing ingredients to find their way into the perfumes we wear and enjoy, but when done wrong, i.e. when low quality materials are used, they can come across as flat and dull, rather than shimmering in the photorealistic manner that they should.

A great example of a truly enjoyable citrus is Maison Francis Kurkdjian’s Aqua Univeralis (Francis Kurkdjian; 2009) – a fragrance that layers the glistening quality of powdery sweet bergamot over white flowers and musk.

It’s perhaps one of the cleanest and most refreshing citruses out there and it serves as proof that simplicity doesn’t have to be boring.

Of course, citrus notes can also be pretty complex too. Just take Thierry Mugler’s Cologne (Alberto Morillas; 2001), for example, which is a more space-age take on the traditional eau de cologne.

In Cologne, the familiar tones of bergamot and neroli with steamy plastic notes to create something that is at once, recognisable, alien and spotlessly clean. It also has remarkable sillage (projection or throw) for a cologne, as one would expect from Mugler.

On the higher end of the price scale, there is Tom Ford’s Neroli Portofino (Perfumer Unknown; 2007) – a traditional eau de cologne with a crisp, white orange blossom note.

Again, this one has a lot of musk like the Mugler, but it feels more natural and is a great everyday wear, whether you’re sunning it up on the Amalfi coast or whiling away the hours in front of a computer screen at work – Neroli Portofino is simply good stuff. 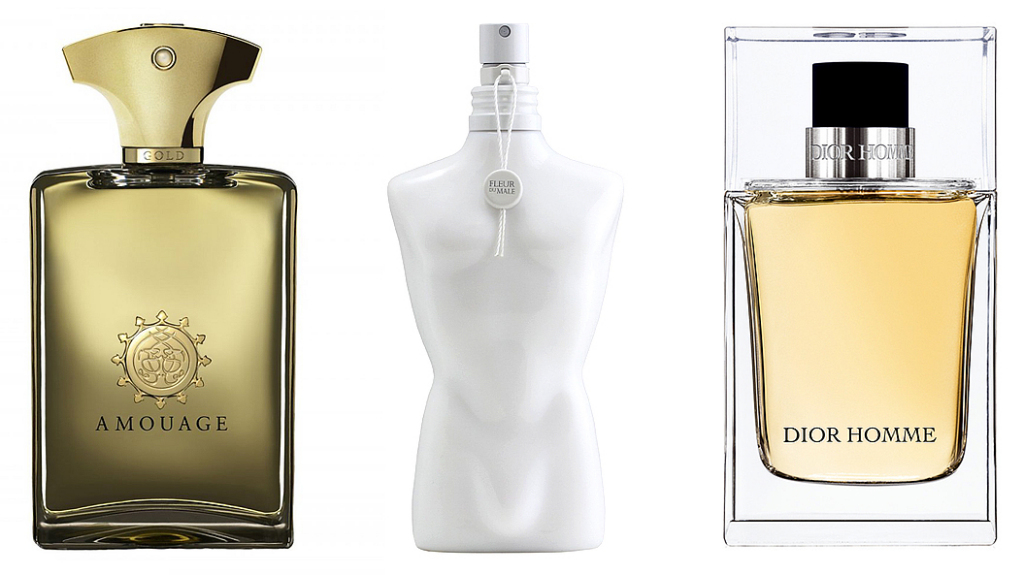 If fougères are the companion of the masculine, then florals belong to the female of the species.

Actually, that’s complete tosh, and any man worth his salt should attempt to rock a big floral at some point in his life, after all it was the gents that kick started the genre back in the Victorian days. Back then; if you weren’t clad head to toe in jasmine, then you were nobody.

One almost musical floral for men is the phenomenal Amouage’s Gold Man (Guy Robert; 1983). This one may cost a prince’s ransom, but it is one of the most exceptionally composed masculine fragrances ever.

Marrying rich florals (rose, jasmine, orris/iris and lily of the valley) with even richer resins, incense and civet (funky musky-type stuff that used to be obtained from the civet cat, but is now largely synthetic), Gold Man is a royal fragrance that is full of flowers, yes, but remains inherently masculine.

Blurring the gender lines a little less clearly than Gold Man is Jean Paul Gaultier’s Fleur du Mâle (Francis Kurkdjian; 2007). The main theme in this floral is orange blossom, and lots of it

Orange blossom has always been a big player in traditional eau de colognes, so it’s not an alien concept to see the note in a masculine fragrance however, the difference with Fleur du Mâle is that the volume of orange blossom is turned all the way up, giving the impression of milky flowers, yellow pollen and creamy vanilla.

Fleur du Mâle is a floral for men that smells entirely genderless – it could be masculine, it could be feminine, whatever, it doesn’t care.

In truth my next choice, the masterful Dior Homme (Olivier Polge; 2005), could sit anywhere in this guide. It has lavender, so it could count as a fougère, but it also has wood, so would be comfortable in the woody category.

It also has a warm suede-like feel and a vanilla dry down, so it wouldn’t be out of place in either the leather or oriental categories either.

That said, the most prominent facet of this nuanced composition is the floral note of iris at its heart. This gives the impression of finely milled grey powder and as it merges with the warm, and chocolaty vanilla of the base, Dior Homme becomes a gentle and supple masculine perfect for those who like to smell good whilst remaining relatively incognito.

Leather has always played an important role in the world of perfumery. In the tanneries of France, leather was treated with lovely substances such as urine and feaces, meaning that they smelled pretty dreadful.

To remove these ghastly odours, leather was scented with materials such as orris, civet and jasmine, and as the need for scent on leather diminished people still demanded the smell that they associated with the luxury of leather, hence the birth of the leather perfume.

Leather is as popular today as it was back in the days of the French tanneries however, the genre is much less visceral and consumers demand fragrances that evoke the idea of luxury leather goods, rather than raw hides.

Tom Ford’s brilliant Tuscan Leather (Harry Fremont; 2007) is a gorgeous, masculine leather that captures one of the world’s greatest smells – the odour of a brand new car. The leather here is fruity, soft and plush.

It has a suede-like texture and as it dries down it becomes more astringent and tar like, evoking freshly treated pieces of leather. It is nothing short of stunning.

There’s a sweet, powdery quality to this leather that is unique to Habit Rouge and as it seamlessly blends into the vanilla and amber (a combination of vanilla, benzoin and labdanum that smells sweet, resinous and gauzy) base, the leather feels strangely delicious.

There’s a reason why this one is often regarded as one of the greatest masculine fragrances of all time!

For a more rebellious take on leather, punk perfume house, Etat Libre d’Orange’s Rien (Antoine Lie; 2006) is a worthy sniff. This is a badass leather that is almost shockingly dry.

It contains a ton of animalic notes and smoke to give a ‘James Dean in A Rebel Without a Cause’ vibe, and it possibly pushes itself to the limit of what is acceptable to wear, but it never quite becomes too much.

The joke here is that ‘Rien’ is French for ‘nothing’, and this fragrance is the absolute opposite of that – it’s a full-on olfactory tour de force like no other.

‘Oriental’ is a very broad perfume term that refers to a style of fragrance that is evocative of the East, achieving this through resins, spices and vanilla.

There are many sub sectors to the oriental, with floral, woody and gourmand (foody) themes playing a strong part to the many different fragrances that sit under this heading.

In short, orientals are fragrant dreams of exotic climes, created from a very western point of view.

Rose is a note that often pops up in the oriental world. This is due to the multi-faceted nature of the flower, which can smell rich and spicy, and adds significant depth to a composition.

One incredibly complex rose is Tobacco Rose by Papillon Perfumery (Liz Moores; 2014). This rose is a blood red rose tinged with minty-geranium inflections and stretched over a rich base of beeswax.

The result is an unctuous fragrance that is metallic, oriental and vegetal all at once.

This is a syrupy and honeyed rose doused in raw, animalic civet, and it’s glorious.

Taking the idea of the oriental to the very limit is Thierry Mugler’s A*Men (Jacques Huclier; 1996). This is a gourmand oriental that contains everything but the kitchen sink, literally.

A*Men is a glorious cacophony of; lavender, mint, chocolate, coffee, vanilla and tar that shouldn’t work on paper, but in reality smells like an oriental on steroids.

This is a glamorous and high fashion oriental that certainly grabs attention.

Woody fragrances are always easy wears for most gents due to their robust and angular structures.

There are so many different types of wood, ranging from the creamy spice of sandalwood to the sharp, pencil-like density of cedar wood, not to forget the plethora of oud-based fragrances, which take the medicinal and barnyard nuances of the noble tree rot and turn it into something extraordinarily wearable.

Oud is very much the note du jour and nearly every fragrance house has at least one fragrance containing the note within their lineup.

One of my favourite ouds is Tom Ford’s Oud Wood (Richard Herpin; 2007) – a spicy/woody fragrance that presents a very palatable oud note atop a bed of rubbery/waxy vanilla.

Oud Wood is a multi-textured wood fragrance that is neither solid nor soft – it’s perfectly in between.

For a more smoky and incense-inflected take on wood, there is always Comme des Garçons’ 2 Man (Mark Buxton; 2004). 2 Man is a good example of wood, specifically mahogany wood, as a supporting act within a composition.

The prominent facet here is a smoky incense that offers up hints of leather and snuffed out candles.

The wood acts as a solid base for this handsome incense to rest upon, joining the sharpness of vetiver to give the impression of a masculine fragrance shaded in deep brown colours.

4160 Tuesdays: The Sexiest Scent on the Planet. Ever. (IMHO)

The final fragrance I’d like to recommend is 4160 Tuesdays’ The Sexiest Scent on the Planet. Ever. (IMHO) (Sarah McCartney; 2013).

First things first, ‘The Sexiest Scent on the Planet. Ever. (IMHO)’ is actually the moniker bestowed upon this awesome fragrance, and I can say for sure that its an apt descriptor.

The Sexiest Scent opens with a lemon-meringue like bergamot note before developing into a textured woody fragrance over a delicious vanilla base. I think every man should have a bottle of this in his wardrobe.